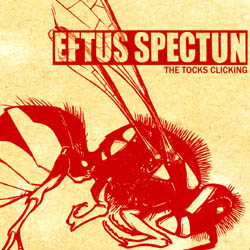 If I start by saying this' a strange release nobody will be surprise since we're talking about Public Eyesore. Eftus Spectun are the result of a weird mix of influences not so far from a less technical answer to Sleepy Time Gorilla Museum, they're just softer, much more swinged and less crippled whatever it means. Can you imagine Teenage Jesus and the Jerks, 8-Eyed Spy, Mr Bungle, Beefheart and James Chance on novocaine jamming in the same band? If you can, then you probably have a sort of idea of what you're gonna experience during this collection of short songs. 8-Eyed Spy more than Contorsions since unfortunately for Eftus Spectun even if they're talented musicians and they're damn odd, they're not as flipped out and not even that nihilistic. By the way, don't think this combo is that linear for they've added some really dark, quasi dark ambient tracks to this already unconventional collection of sketches and what follows is a consequential scary atmosphere. Dark-post-no-wave work? More than this that's why I've said these people is ideally comparable to Sleepy Time Gorilla Museum, for example take "The moth and the oval vase" and "Spekled Nesbit" it's not always obscure music, sometimes I can guess there's the shadow of Zappa (... Faith No More?) gone deformed and in some way: "fusion". I think now you've everything you need to start painting a picture of this weird weird english band.