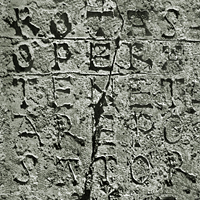 This could be the real clash of the titans of dark ambient and you just need a sight to their individual discography and it will tell you more than any word I can write. Even if both Marutti (Amon/Never Known, headchief of Afe records) and Giuseppe Verticchio (Nimh) in the recent past have put out many material that’s not strictly dark ambient, here they do what you probably can expect from such an odd pair. Hence, Sator begins with a "concrete" monumental drone that scares the shit out of the listener as to say ambient can still be heavy as fuck. The matter of the release but also the sound choice of this collaboration reminded me of an old Grinzich/Nehil joint ventures but way more reverberated and dark. The funny thing is that somehow I got the impression Nimh as been "Amonized", I can’t say that firmly but sure while listening I’ve found many traces of Marutti’s "heavy" hand on the crime scene. Probably that’s just a suggestion since what I can guess they simply mixed the most obscure and intimist aspect of their individual personalities finding a common ground they could share for this opus. There’s an abundance of delays/reverbs and a copious use of keyboards even if in some passages they left them still intelligible but not without burying it under a heap of thick low noises/echoes leading in the mid of the dark pool. While the first three tracks of this output present a framework mainly based on delayed-noises, the dronical-essence rears it’s ugly head just with the fourth "movement" of this cd and it lately disappears in a "freaky-post-krautian-Schultzesque" sad "sauce" (yes, dark freaks have a safe ground to walk upon). With the closing chapter of this book arrives my favorite one: dark ambient in full effect that all of a sudden fades into a quiet mechanical drone and into a rarefied paste made out of bells? voices?... anyway, it will blows you brain and resistance out for sure. A first class recording/package complete this good release, the only things I ask myself is what if it would have been a bit shorter, but you know many artists doing this kind of things want to test the guts and the balls of their listeners, "will you dare to take the whole trip?". If you’re into dar ambient at the edge with some post industrial landscape here’s a journey you can definitely take.