RICARDO ARIAS/GÜNTER MÜLLER/HANS TAMMEN: Intersecting a Cone with a Plane 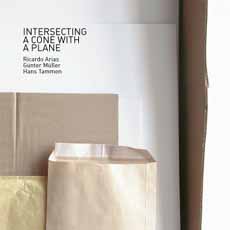 With only a handful of peculiar and talented artists, it almost becomes embarassing to write reviews, since everything they do seems to be blessed with an uncommon degree of excellence. Günter Müller surely belongs to those chosen few, and every recording of his, be it solo, duo or ensemble, has both a costant quality and an individual mark; in the case of collective improvised performances, it's also stunning how his electronics, or drumming, merge with the other players while maintaining their own filigree. "Intersecting a Cone with a Plane" features Müller at his usual set of "assorted percussion, mds, ipod, electronics, processing", Arias at a mysterious "bass-balloon kit" and Hans Tammen at an equally puzzling "endangered guitar" - one of the few cases when I wish there was a live photo to understand what the hell they were playing... Anyway, the three tracks, recorded in New York in 2003, are an exhilarating texture of sharp and pointed sounds, crackling electronic particles and controlled feedback, and some lower rumbles - possibly the bass-balloon thing? While not overtly harsh, and full of subtle details, it sounds like a slo-mo recording of something boiling over, a free jazz record melting through fainted tapes and blown circuits.