Confrontational: Under Cover of Darkness 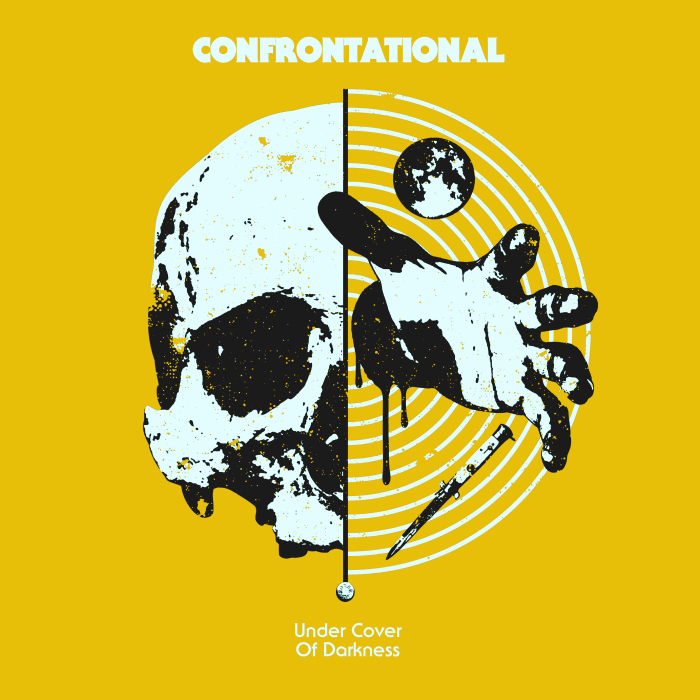 Confrontational is the musically outfit for Massimo Usai (vocals, guitars, synthesizers, programming) and his partner Juan Zurdo (Simmons drums, live percussions) and it hails from Cagliari, Sardinia / Italy. Founded in 2014 this project could already gain some attention with live performances at famous venues (WGT Germany in 2018 or at Frantic Fest in Francavilla al Mare, Italy, in August of last year). Also their various cooperations with some well discovered guest vocalists out of the Synthwave-/Outrun-genre like Cody Carpenter (Ludrium / John Carpenter), Tying Tiffany, Tobias Bernstrup, Trevor William Church (Beastmaker / Haunt), Hélène De Thoury (Hante) or Tony Kim (Dance with the Dead) this project has gained internationally reputation. "Under Cover of Darkness" is already the fourth full-length album and has been already digitally self-released by this band project at the end of October 2019. So the reason for this review is the celebration of the consequently release on vinyl and CD via the label Synthstorm Records, also hailing from Italy.
This album is sort of a conceptual release and you'll get a satisfying explanation with the information around this album: "There is a thick red line that binds together the worlds of darkness and disco - a line that can be traced through some of the tracks that unsuspectingly topped international charts between 1975 and 1987, going straight from Goblin's "Deep Red" to Sabrina Salerno's "Boys." A story originated on the dance floor through lyrics that, when read through a certain peculiar angle, attest to a number of severe implications. A wild ride into the night, ripe with possibilities, fear and excitement".
Therefore Controntational have decided to release rather a tribute just to praise some of the instigators, who could unite the classic, slightly depressive 80s life-style and emotion with the then up and coming Italo Disco genre, which has seemingly left a lot of impact on the producing musicians. Guest vocalists have been again hired with Cody Carpenter, Adrien Grousset (Carpenter Brut), Tobias Bernstrup and Amedeo. As the chosen guest vocalists are mostly based out of the Synthwave- / Outrun genre, it shouldn't wonder too much, that also Confrontational's music expression rather picks up compareable ideas. There can be also named Dark Wave, Synthpop or even EBM with a slightly Crossover touch as musically references to describe their background.
It even brings a smile to the listener to hear that cheesy "Boys" - here simply re-named "Summertime Love" - originally sung by the busty sensation Sabrina Salerno back in 1987, but here with Tobias Bernstrup to replace her performance. Musically it is a haunting tune with furious guitar riffs thrown into the mix - but the right one to animate the audience to sing along the chorus line. Also the Bohlen composition of Modern Talking's classic "You're my Heart, You're my Soul" (Here simplified into "You're my Heart") receives its roughly produced transmutation into a biting synth smasher with screaming guitars and Amedeo's vocals. Also Den Harrow's top-hit "Future Brain (feat. Cody Carpenter)" or Yazoo's classic "Don't Go" reveive a tastefull refreshment in those darker and gritty styles. It's difficult to point out THE hit track of this album because all of these reinterpretations have it own advantages.
Confrontational and in person of Massimo is capable to provide purest 80s infiltrated Pop- and Wave-art, although he seems to have a darker and more ominous sounding view on this era. That is in no way to blame, it's rather the opposite because some of these mentioned top hits have lost through endless repetitions via radio its magic in those days. Therefore this new, darker and more biting reinterpretations are a welcomed alternative. Get it while can and to purchase this goody on vinyl seems to be a must-have for all retro lovers.