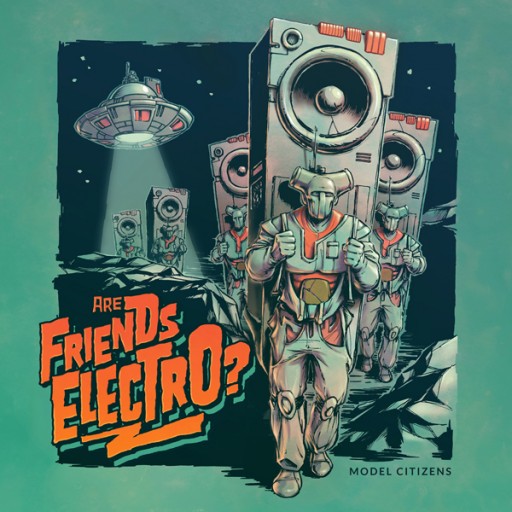 Model Citizens are an electro duo coming from UK and formed by Phil Klein (Bass Junkie) and Matt Whitehead. Are Friends Electro? is their debut album released by Germany’s Dominance Electricity. Their music has its roots in the 80s and sinister vocoder vocals, driving bass lines and upbeat drum rhythms also good for the dance floor are their bread. Are Friends Electro? is paying its tribute to the 80s electro having West Coast Hip Hop/Electro legend The Egyptian Lover as a guest into two tracks: they have a remix of his jam “Into The Future”, taken from the album “1984“ and he’s singing on “Sphinx-O-Matic”. Released on vinyl, CD and digital download, the album has eight tracks on the first format and eleven on the latter two as there are three bonus tracks ( “Drive”, “Mega Squid vs. Monster Octopus” and “Celestial Mechanics”) coming from the duo’s previous EP “The Loud Minority”. If you are into electro I’m sure you know the Bass Junkie albums “In Bass No One Can Hear You Scream” and “Bass Time Continuum” and this should make you already be curious about “Are Friends Electro” but if you’re an old Chain D.L.K. reader, you should know that I’m always honest and I’m not acting as a second used car dealer, so believe you me when I’m telling you that this is pure 80s fueled electro, but if you want to check yourself, here you can do so https://dominanceelectricity.bandcamp.com/album/are-friends-electro