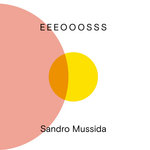 The composer presents this release as based on the possibility "to pause, to observe and listen to the richness, the details and nuances of the timbres", so this is a work in three movements ("EEE", "OOO", "SSS") for electric guitar, bass clarinet and cello samples and every instrument has its own tuning. With this approach, the linking element is not the melodic line but the harmonic one so we are roughly along the path of minimalism.
While this is apparently static music, as there's not immediately recognizable repetitions, there's a movement in timbre which is as slow as linear and makes a remarkable use of the acoustic properties of the Church of S. Giusto in Volterra as the nave, the transepts and the choir have different reverbs. The result reminds the listener that music is not an abstract object but it's the result of the relation between the sound source and the environment in which it evolves; so, the slowness of the tempo is tied to the possibility that the environments acts as an instruments with his partials added to the sound of the instruments to generate what is percepted by the listener.
This release is mostly targeted to fans of minimalism as the theoretical framework of this release is rooted in this genre but it doesn't use any repetition of a catchy melodic line so it's closer to what it's commonly referred as sound art than the people's concept of minimalism i.e., a form of modern classical. This is a somehow demanding listening but it will be awarded by music of great beauty. Recommended but listen with care.