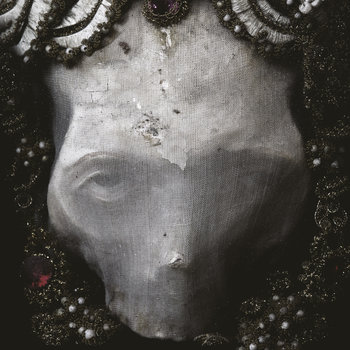 O Saala Sakraal is a collective led by former Hadewych member Peter Johan Nÿland and "Etmaal" is described, in the liner notes, as ""the first in a series of explorations that aim to serve as a channel between the ethereal and chthonic". In concrete terms, this is ritual music based on percussions as the line up is made out of four percussionists which accompany Nÿland who plays tapes and a piano-string percussion instrument.
The first track of this release, "Stasis", after a first part where percussions, mainly bells, create a quiet and meditative atmosphere, the change in the background from a drone to a noise marks a movement towards a more dynamic framework where drums appears to symbolize the earthly element of reality after the ethereal one of the first part; this is further underlined by the distorted, and barely audible, voices. The final section of this release is centered upon the piano string and it's a rhythmical barrage ending in an ethereal soundscape.
"Lilit" starts as a slow crescendo for string, with various samples which create a menacing atmosphere and spoken words introduce the drums and a second part based on synth and an insisted rhythmic pattern that is suddenly interrupted by the return of the bells and a gong for a meditate section which is a ment of rest until the restart of rhythmic pattern accompanies the listener towards the end of this release in a final howling crescendo for voice and noises.
This is something rather different from the releases marketed under the dark ambient genre as rituality is not a trivial matter of silence and sparse beats of gong but an atmosphere construction which reflect the premises of this release. Highly recommended.