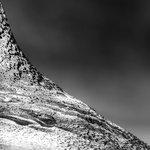 After the EP "A Slow Decay" already reviewed some time ago, Anthony Tombling Jr releases his debut album which is inspired by his concerns about the earth's fragility due to climate changes caused by human actiity. While "A Slow Decay" is something between minimalism and IDM, "A Gradual Decline" shows also ambient influences as there a certain use of drones and textures when there's not the presence of a beat.
"A Gradual Decline" is the only track present in both releases and starts quietly with loops starting sequentially until a beat underlines the rhythmic structure of the track and introducing its impressive melodic breaches. "Shattering Through" develops his synth melodic lines with a slower pace. The sharp distortions of "Polar" underlines its rhythmic structure. "From Here To Nowhere" is an ambient track based on piano chords and filtered female voices upon an ethereal soundscape. "Time Is Not Your Friend" and "Maboroshi" evolve from a drone to a melodic catchy tune. "Pollen" has a suspended atmosphere due to its use of resonances and echoes. "Beauty Collapsing" revolves around a mechanical beat. "Kernel Panic" alternate part based on complex beat to beatless and noisy ones. "Gravitational Loss" is a short drone interlude and "Fear Of Everything" is a long crescendo which proceeds by accumulation of sonic layers to create a soundscape of charming spectral density.
This release confirms the quality of sound construction hinted by the EP and will be enjoyed mainly by fans of IDM and ambient music and could even be listen among the releases of the year. Highly recommended.