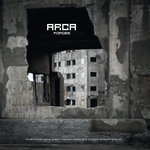 Arca is a project by Joan Cambon and Sylvain Chauveau which are already known as a solo artist and whose music stands in that sort of grey area between minimalism and pop music; this means that "Forces", a release inspired by people living in conflict zones all around the mediterranean sea, use the canonical musical cell of minimalism i.e., repetition, but some of other elements used are catchy. So the result could be described as experimental or pop depending on the criterion.
While the first track of this release, "Noura Al Ameer", has a beat which fades as the background emerges and "Bayan Hout" is based around a glitchy loop tying together fragments of sound which evolve in a final dance, "Aliaa Magda Elmahdy" starts to introduce an central element in this release: quiet melodies vaguely catchy but not filling. "Wiam Simav Bedirxan" seems a loop but is a melody evolving by repetition orated by the insertion of a sort of old recording. "Ebru Firat" uses the same structure but evolves by accumulation of the layers with a break to avoid triviality. "Arieh Sandler" is an interlude for guitar and "Anonymous Nigerian Refugee" uses the samples of the voice of a refugee as a rhythmic structure isolating sentences. "Dahi Al-Musalmani" has a grave and solemn pace which evolves in the meditative atmosphere of "Damir Šagolj". "Ari Folman" and "Leyla Zana" are sonic miniature sounding as almost deriving from old records. "Paul Favre-Miville" is loop music and "Ossama Mohammed" is an ambient track evolving in a final lullaby.
This is a release that tries to show its view on a issue which usually polarizes the audience without any rhetoric and this is obtained by avoiding the modern classical mannerism that is so common in those kind of releases. It's really worth a listen.