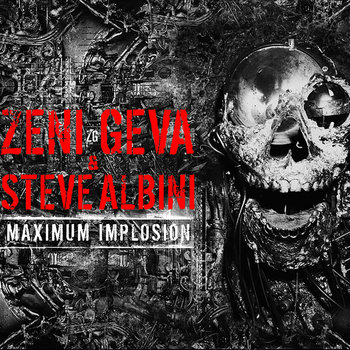 This double cd collects all pieces between Zeni Geva and Steve Albini: the EP "Nai-Ha" and "All Right, You Little Bastards!" a live recording in Tokyo and Osaka. The contribution of Steve Albini, to the heavy form of rock which is the mark of KK Null, is the clean and dry sound which is typical of his recordings and the insertion of more meditative moments in the assault of the japanese band.
This could easily be heard in the second section of "Autobody" or the first section of "Angel" which features also the guitar of Steve Albini. The other track are based on a vision of heavy metal where hammering rhythm and distortion create a sonic wall that never degrades into noise. As a bonus the two tracks of "Superunit", with Albini on guitar, are included where there's a perceptible shift toward the indie rock form which is typical of Albini's music so it's slower and more varied. The second cd is a live with Albini as a member of Zeni Geva featuring also track from the first cd and where there's a more energy and less sound details with the result that is enthralling in some moment in a peak by the cover of "The Model" by Kraftwerk in which with acuity sounds as a Zeni Geva track while retaining the pop allure of the original.
This is a reissue of material that has never produced a school or a genre but has had various little influences in a wider musical perspective than heavy metal and indie rock. It was never ground breaking but has that kind of personality that from the first notes, the listener knows who are the players. Absolute respect.