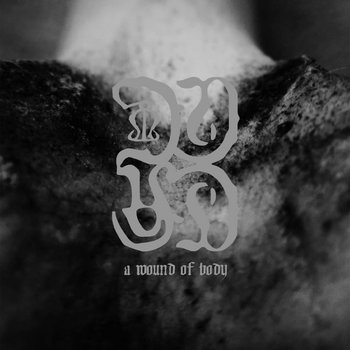 Common Eider, King Eider returns with a new release that change a little bit their musical style as it starts to be personal. While their previous release were well written but showing their influence, "A Wound Of Body" is centered upon two elements: wide reverberating drones and silence. Nowadays dark ambient is a synonym of sharp drones and foley to create realistic soundscapes which surround the listener while this is a release that almost asks the listener's attention to catch the nuances of the sound as it often tries to hidden itself in the environment.
The first track, "Remembrance A Threnody", opens this release showing the particular idea of dark ambient that is the base of this project: instead of being based on drones, the track start with isolated noises and long tones at relatively low volume and immersed in silence; only at the middle of the track, a slowly developing melody appears but it's just an interlude for the return of isolated and atmospheric drones with distant cymbals in the background. "Sinew Stretched Over Crumbling Bones" is instead more cinematic as it starts with a drone which it's slowly evolved by accumulation so it has a far richer spectrum and surrounds the listener in the final moments of the track. "We Sing Over These Bones So That They May Rise Up And Run Away Into The Night" is the shorter track of this release and it's centered upon a slow violin line underlined by sparse insertions of atmospheric drones. A wide spectrum drone is the core of the first part of "Helene" while the second one is based upon sections separate by a couple of seconds of silence. "River Of Blood" closes this release with a quiet atmospheric drone which is the background for a violin melody which starts as a drone underlining the background and evolves in the final part of the track in a sort of accompaniment for filtered voices.
With this release, the project show an almost developed personality which is the center of a release that sounds as something really different from the rest of the scene. Highly recommended for fans of dark ambient.