Sparkle in Grey: The Bones of Quietness 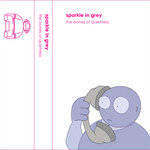 Almost ten years after the publication of “A Quiet Place”, which was a remarkable release even in its flaws, Sparkle in Grey try to remove its most evident character: the tendency to accumulate and the search of a romantic moment in an overall experimental framework. This was evident even in the covers by Matteo Uggeri whose drawings seems from a kid's publication to a distract sight. So The Bones of Quietness is “A Quiet Place” removed of all the catchy element and exposing the skeleton of the release.
"Bones of a Footprint" is mostly mode out of field recordings with only the distant sound of the violin and the cymbals to remind the original track, "L'impronta", while the "The Bones of a Goose" has no field recordings to expose the traditional musical elements of their sounds and "A Quiet Pig" removes the danceable melodies which was the main elements of "A Quiet Place". In its apparent stillness "Teachers Bones" hasn't even a second more than necessary and removes the kids songs which was the emotional center of "Teacher Song"- "Pim Bones in Delay" borders psychedelic rock while "An Unperfect Delusion Song" closes this release with the most suspended side of their sound shortened in time to escape and evolves in a quiet field recording which accompany the listener towards real life.
Removing even the first signs of rhetoric or romanticism to their music and focusing on even the small details of their sound, Sparkle in Grey have now another starting point for their music. Truly recommended.