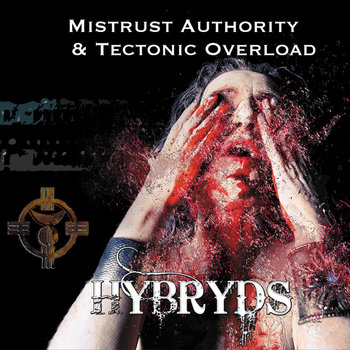 Zoharum continues his reissue plans for Hybryds with a collection of two works "Mistrust Authority Promote Decentralization" originally released 1996 and bundled here with the bonus of a live recording of the same year and "Tectonic Overload" released in 1998. While the previous release were prevalently based on evocative ritual music with vague oriental influences, this are more aggressive music closer to industrial EBM influence by cyberpunk themes.
So, as "noise2trance" starts the listener is overwhelmed by the intensity of the sound barrage based on loops and rhythmic cages and this lasts for all the release featuring also quotes from writers as Timothy Leary to further clarify the message. While it's particularly noisy "dead zombie dance", there's a small return to their distinctive style in "I walk alone" even if the overall sonic impact is due to the questionable remastering by TraumaSutra where large part of it is characterized by an over compression. It should be noted, as "Tectonic Overload" is not labelled as remastered, that the high volumes and compressed sound were probably part of the sound construction of that period. So, while there are even better ideas, the musical result is characterized by a dried out sound which now sound a little bit outdate and trivial in his research of physical impact.
Fans of the band and collectors will have a release with takes with it a part of the zeitgeist of the period were cyberpunk ideas had great currency and so will have a little bit of nostalgia. The others could perhaps avoid it for its lousy sound yield and orient themselves for the others reissues.