since 1994, your no.1 source for electronic, industrial, ambient, dark, experimental & new music...
FOR IMMEDIATE RELEASE:

Artoffact Records to reissue Nash the Slash’s And You Thought You Were Normal and Decomposing.

Unreleased Daniel Lanois-produced mix to be included amongst the bonus tracks. 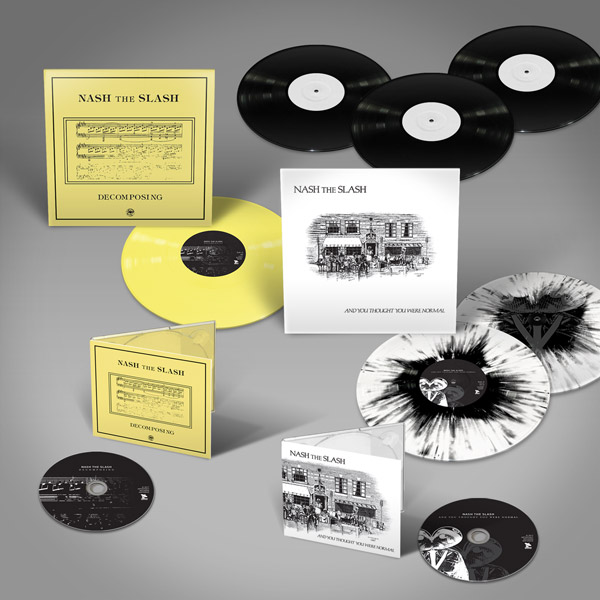 Toronto-based label Artoffact Records announces today two additional reissues from the Nash the Slash discography. 1981’s hard-to-find EP Decomposing will be reissued on vinyl and, for the first time ever, on CD. Decomposing includes one of Nash the Slash’s best-loved hits, “Womble,” and was, according to Nash, the first record ever released that was playable at three speeds: 33.3, 45, and 78 RPM. The Artoffact Records CD will include the EP’s entire selection three times, once at each speed.

Another Nash rarity that will get the reissue treatment is And You Thought You Were Normal, Nash’s second full-length album, released originally in 1982. Notable in particular for Nash’s first major radio hit, the Daniel Lanois-produced “Dance After Curfew,” Normal was released in Canada, the USA, and the UK, and would find an unexpected and devoted audience in Poland. The album would end up being Nash’s last for nearly a decade.

Digging into the Nash the Slash archives, Artoffact Records uncovered several previously unrelased mixes of “Dance After Curfew” produced by Daniel Lanois, and the best of these is included on the CD as a bonus track. As well, music from the Colin Brunton film “A Trip Around Lake Ontario“, as well as several cuts from the Bruce MacDonald film Roadkill have been added as bonus material. Each edition will be released on special vinyl, a yellow version for Decomposing, and a collectors’ “Vincent’s Splatter” (named after the track “Vincent’s Crows”) for Normal.

Special test-pressing collector bundles sold out the same day they were announced.

Nash the Slash, aka Jeff Plewman, was a rock and electronic musician famous for his masked-man stage persona who became famous for his touring and collaborating with Gary Numan. He also supported Iggy Pop in the 80s, worked with Canadian surrealist painter Robert Vanderhorst and recorded soundtracks for several independent Canadian films, including Roadkill and Blood & Donuts. Plewman passed away in 2014 at age 66. In 2016, Artoffact Records, based in Toronto, began to reissue Nash the Slash’s entire catalogue on vinyl and CD.

Article on the first four reissues via Exclaim!
Feature on the reissue series via Electronic Beats
Exclusive stream via Bloody Disgusting
Article on Nash the Slash via Vice / Noisey