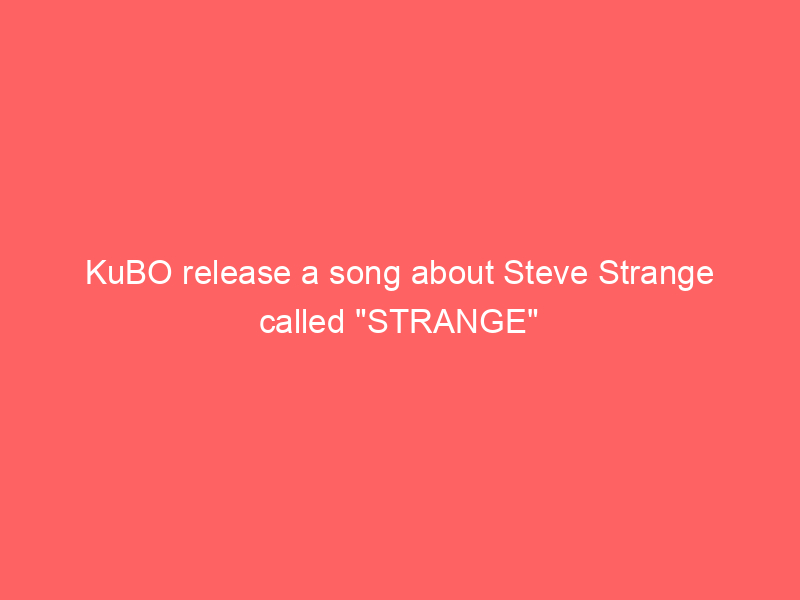 KuBo are delighted to announce the release of a brand new single ‘STRANGE’ ,in aid of the Terrence Higgins Trust Cymru (Wales). The song is inspired by the iconic , New Romantic trend setter and trail blazer – Steve Strange.

Arriving in two unique versions;
the ‘Synthwave Mix’& ‘Dark Mix’,KuBO have given the song two very different musical slants.The first is a classic Synthpop orientated version in reverence to Steve and the music he made.The second, a darker, slower and more sinister mix, in keeping with KuBO’s distinct Synthwave sound.

The song itself focuses on Steve’s legacy and his unique vision for not only who he was,but how he wanted to portray himself to the world as an artist.
He became more than an oddity on the cover of a magazine.He become an Icon for a moment in time, the face of a small group of outsiders, who decided the 80’s was their decade, and it was ok to be strange.

The single is a fund raiser for the Terrence Higgins Trust Cymru (Wales), a trust Steve himself was very close to.

The sleeve artwork is taken from ‘Saint Steve’ by New York based artist Matthew Lineham, part of his ‘New Wave Saints’ Series.

In October this year, Porthcawl in Wales, see’s the first festival to celebrate Steve Strange, with the New Romantic Festival at the Grand Pavillion.

KuBO are a Dublin based electronic duo, producing synthwave/minimal electronic music on vintage analogue synthesizers.Consisting of Brian O’ Malley (PolyDROID) and Aidan Casserly (Glass Dancer). Brian’s ‘Gary Numan’ and ‘Vangelis’ inspired dark, cinematic synth layering’s, under pinned by pulsating bass synth lines and tight drum programming are the perfect counterfoil to the angelic voice of Aidan Casserly, who’s long term fascination with ‘David Bowie’ ,’Jacques Brel’ and ‘Kraftwerk’ make for a meeting of the minds that goes back to the roots of the music the pair made as teenagers.

Those original inspirations, fuelled by a fascination with Science Fiction, Avante-Garde cinema, alienated and …… Vampires, are once again at the centre of these recordings, which makes for a synthetic landscape of brooding, melodic, minimal electronic, with the focus on a pure and deliberate exploration of synthetic sound and evocative vocal melody.

Since forming KuBO they have released a cassette single with UK Label Vocoder Tapes called “I Dream Electric” , a 7″ vinyl with UK minimal wave label Peripheral Minimal and are currently recording their debut album ‘Straight Lines’.

Vision Eternel’s For Farewell Of Nostalgia EP Is Out