The Remix Wars series to be reissued on vinyl via Artoffact Records. 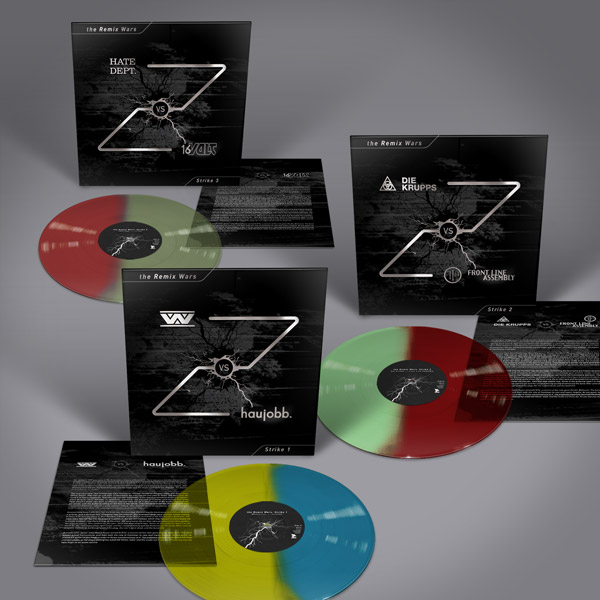 The famous 1990s Remix Wars series, in which two artists remix each others’ tracks and release them on a split CD, is finally getting much-deserved vinyl reissues through Toronto-based Artoffact Records.
The series first launched in 1996 with the release of Strike 1: :wumpscut: vs. haujobb, and later installments included collaborations between Die Krupps and Front Line Assembly, as well as 16 Volt and Hate Dept. Each edition included three tracks by each artist.
The Artoffact reissues are fully authorized remasters and will each also include an essay by Sharon Kyronfive, former 21st Circuitry employee. 21st Circuitry pioneered the Remix Wars concept, and also released the first CD in the series. Later releases came from Cleopatra Records, Off Beat, and Metropolis Records before the series folded in 1999. Sharon’s time at 21st Circuitry, and her experience as a writer, gives her a unique perspective from which to write confidentally about the Remix Wars’ influence and staying power.
Each record will be housed in a beautiful sleeve recreation of the original art, complete with silver-foil stamps over the iconic logos. The editions, planned for summer release, are as follows:
Strike 1: wumpscut vs. haujobb
Strike 2: Front Line Assembly vs. Die Krupps
Strike 3: 16 Volt vs. Hate Dept.

Samples of all three Remix Wars on the Artoffact Soundcloud.
BAND INFO