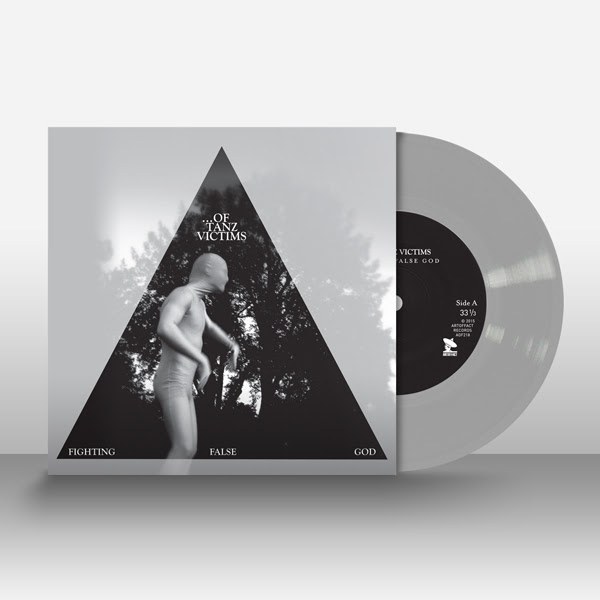 Toronto, Canada–The Montreal-based industrial project Of Tanz Victims will reissue their debut 7″ vinyl Fighting False God on Artoffact Records in September.
Of Tanz Victims formed in the early 1980s in St-Jean sur Richelieu, just outside Montreal during a time when industrial music, the so-called second-wave, was taking off in parts of Canada and North America. The history of the movement in Canada tends to focus on the Vancouver scene, but in Montreal, on the other side of the country, Of Tanz Victims quickly emerged with both vinyl and tape releases that challenged, intrigued, and redefined what Canadian industrial could be.
The group was influenced by the British industrial movement, including by Psychic TV, Cabaret Voltaire, and Throbbing Gristle, but were to a large degree “doing their own thing” in Montreal. The project was also one of the first to make use of digital samplers when they first became available in Canada.
Of Tanz Victims received initial support from Montreal’s Bunker, an import vinyl shop run by the late Robert Vincent. Despite the first 12″ being refused entry across the US border due to its apparently obscene cover art, Of Tanz Victims was successful in Europe, particularly in Belgium as an import, and over three years managed to release three 12″ vinyl and a handful of cassettes.
But what started things off for OTV was a remarkable 7″ vinyl of gritty, looped and guitar-laden industrial noise that felt fresh and alive, with the challenging name Fighting False God. On the 30 year anniversary of first issue, Artoffact Records will release a remastered and redesigned edition of this Canadian classic. The new version is presented with a new cover photo, while paying tribute to the original triangle-shaped design.

OF TANZ VICTIMS IN THE PRESS