Amber Brien, Jon “Vomit” Worthley, Michael Durek, and Robert Pepper are the permanent members of the  tentacular ensemble PAS Musiqu. The first spark came from the creative whim of Pepper, who founded the project in New York in 1995, but after its birth PAS Musique received contributions by a number of notorious collaborators, including Z’EV, HATI, Steve Beresford, Brett Zweimann, David Tamura, Philippe Petit, Magnetica Ars Lab, The Vultures and many other inspired music minds. On the occasion of the release of their new album, “Abandoned Bird Egg”, which upgraded their intensely psychedelic experimental flames that vaguely surmise Rapoon or Coil, we had a chat with PAS Musique’s founder. Available on digipack cd or digital, “Abandoned Bird Egg” comes out on Alrealon Musique. 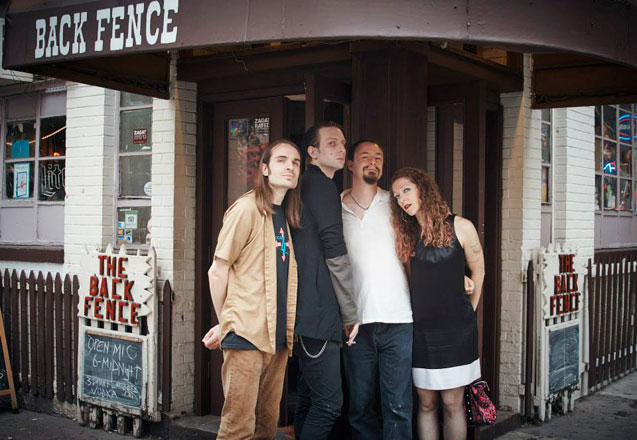 Chain D.L.K.: Howdy PAS Musique! I’ve read that interesting explanation about the origin of your name and its connection with your own sonic approach… could you explain it to our readers in your own words?

PAS Musique:  Hello! These days our name has evolved into PAS Musique. In days past, PAS stood for “post abortion stress”. At the time I was into hard industrial music. I found a Bible pamphlet on the subway. It was a lecture on abortion titled, “post abortion stress”. I thought that was an excellent metaphor for people being different or aborted by society. Later on some French fans were calling us “Pas”.  Then I thought… “Wow, that name is even better… not music… in French”. I see it as not music because of our collage approach. We all improvise together to create half hour pieces. Then in post production, we reorganize our recordings and add new field recordings and/or tracks. The music is forever regenerating and becoming something different. Live, we improvise with the same instrumentation and samples like on the cd but it comes out very different. So it doesn’t have a recognizable structure or repetitive organization. Sometimes we solely create sound environments. So it’s really a cross between sound art and improvisation.

Chain D.L.K.: After listening to the initial “Commercial Space” with those complaining muezzin-like sample and somehow bloody red-hot guitars I thought PAS could be a diminutive of Pasdaran… what can you tell us about the “oriental” pulsing vein within your sonic sculptures?

PAS Musique:  The eastern influences came in two parts. As of late, I have been reading a lot about eastern mysticism and it’s origins. A gentleman named Manly P. Hall has been quite an influence. So theme wise, this is where that influence comes from. For the samples, they come from various found footage sources. I just happen to be finding lots of eastern footage with ceremonial percussion. It’s funny how these themes come together.

Chain D.L.K.: How did you meet and give birth to PAS Musique?

PAS Musique: PAS Musique started in 1995. It was a solo studio project at first until I met Jon Worthley in early 2008. Then we started playing gigs in and around New York City. During this time I met Amber Brien and she joined us for our early gigs. We were a three-piece for a year. Then Michael Durek found us in 2009 through myspace. Michael was looking to get involved in experimental music. He studied the upright bass for years and played in many projects. But unfortunately he acquired tendonitis. It got so bad he had to drop the upright bass. So he picked up playing the theremin so he wasn’t stressing his arms. I loved his playing and one gig led to another and then he was touring with us! There have been many guest musicians throughout the years but one notable to mention is David Tamura. He is our unofficial 5th member. He plays synths.

Chain D.L.K.: A propos of birth, something from an abandoned bird egg was born, wasn’t it? Which kind of bird is it? A parrot, an eagle or what?

PAS Musique:   It’s a metaphor. It doesn’t indicate any type of bird. It’s a metaphor for lost knowledge of what we really are and our connection to nature. The world is so materialistic that we forget that there is something deep within us that we are all connected to. We forget to go deep within ourselves for answers. We look for answers in this material world that doesn’t supply anything we really need. The egg represents the once secret knowledge that we have lost by materialism.

Chain D.L.K.: Is there some conceptual fil rouge linking it to some of your past stuff?

PAS Musique:  I would think so. I have always been interested in the occult sciences and love horror writers such as Arthur Machen and Gustav Meyrink. The music is an outlet for my thoughts and I am fortunate enough to have talented people to join me in my vision. 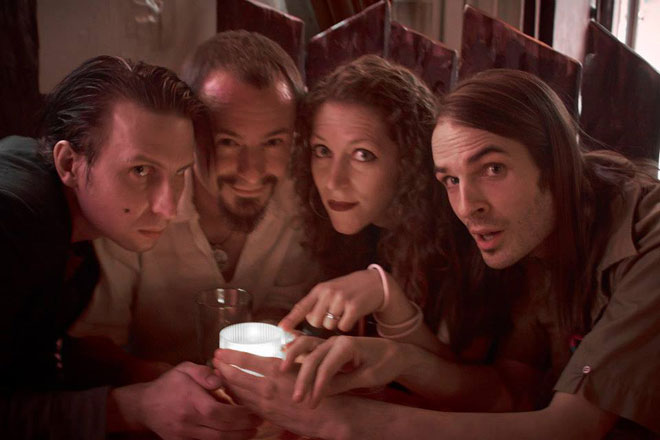 Chain D.L.K.: Is that lost connection between humans and nature you referred on “Abandoned Bird Egg” part of a process? What are the starting point and the possible “end of the line” of that process in your viewpoint?

PAS Musique: I think it’s more of a realization that there is something else in nature and inside you that is much more important than anything in the world of materialism. Call it God, call it energy, but from my perspective I can’t deny that there is something that connects us together. But we are so fascinated by the material world that we distance ourselves from the truth.

Chain D.L.K.: You described your music as a set of sonic sculptures in the mode of pure art, but does it really exist as pure art, which is totally free from artist’s personal touch or his/her perception?

PAS Musique: We all interpret our own art. It’s the personal aspect that makes it pure. When you lose that personal touch then art becomes entertainment. It looses it’s soul.


Chain D.L.K.: After a track of yours has been completed and recorded, have you ever compared your own different ways of feeling it? Any bizarre results after such a trial?

PAS Musique:  After I complete anything, I absolutely hate it. So I need several months before I can listen to the material as a listener. Most times I think, “wow, we recorded that?” But there have been times where I ditched a whole CD worth of material. If I don’t like the material after sitting on it for a while then I don’t think it’s good enough to release. When I am in the creative process sometimes after the material feels alien to me. I almost don’t remember it. It’s like something else takes over me.

Chain D.L.K.: Even if experimental music is often difficult to compare to previous experiments, would you include Robin Storey (Rapoon/Zoviet France) or other sound artists among your possible stylistic predecessors?

PAS Musique:  Robin and PAS Musique actually have a release together on the label Ultra Mail Productions. It’s called ‘Manuscript Stickem’. It is hard to join forces sometimes but I think the success is to have some sort of personal connection. Robin and I have lots in common so I think that is why our first release is a success and we are working on a second cd. As for others, I have to know them first to see what they are about. In the past some successful collaborations have been with Philippe Petit, Vultures, Jean-Herve Peron, John Driscoll, Al Margolis, and Brandstifter.

Chain D.L.K.: One of the most heady tracks of “Abandoned Bird Egg”, “Something Indescribable”, includes a vocal sample… where did you grab it from?

PAS Musique: All of the vocal samples come from a movie called ‘Audrey Rose’ by director Robert Wise. I was inspired by the eastern mysticism theme in the film.

Chain D.L.K.: “Modern Witchcraft” seems to summarize a part of your artistic vision about de-humanizing materialism which remarkably detached man from nature… is it so? Could music break the spell?

PAS Musique: I think the whole release tries to make a simple point and that is there is more important things in life than materialism. I am not sure it can break the total “spell” but maybe one or two people will be inspired. Then I consider my job done and the CD to be a success.

Chain D.L.K.: What about that hiccuping choir of “You Are Who You Are”?

PAS Musique: It’s a sample from China from a Buddhist celebration. I got it from some found footage. 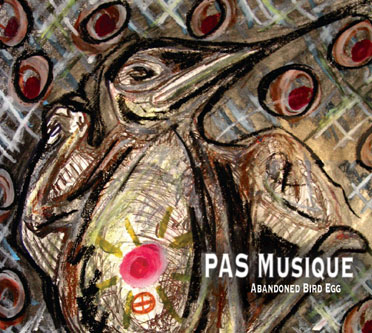 Chain D.L.K.: Have you performed “Abondoned Bird Egg” live yet? If so, what was people’s reaction?

PAS Musique: As I said, the live shows are improvisations and are different every time. But I have been using certain patches and samples for the sets that give across the same feel and/or message. The overall reactions have been positive. One way to tell is that at the end before applause you hear total silence. So that means most people are paying attention.

Chain D.L.K.: What’s the most bizarre sonic source for samples you inserted in “Abandoned Bird Egg”?

PAS Musique:  Hmm… I don’t think I can consider any of the to be bizarre. But I do seem to be liking ducks and animal noises post ‘Abandoned Bird Egg’.

Chain D.L.K.: Birds (and eagles in particular) have a particular negative symbolic meaning… bI could mention masonic of highest masonic ranks, the transformation into an eagle by Lautreamont’s fictional character Maldoror while fighting against a dragon, whose defeat was associated with the end of hope by that visionary writer, or the eagle on some national flags… what about your baby bird?

PAS Musique: Regarding Masonry and the Eagle (United States imagery), there is a theory that the eagle started as a phoenix. Then it became more representative as an eagle. The phoenix represented transmutation of the soul. Which is always a positive symbol. It’s a Masonic theme. I don’t necessarily think Masonry is negative, I think the internet has made it into a negative thing. But again the egg doesn’t represent a bird in particular. It could possibly be a phoenix. Some of the “lost knowledge” is all about transmutation.

PAS Musique: Right now, I am working on a cd with recordings and art from our 2013 tour with Brandstifter. It will be a 20 page booklet of “Lost and Found” papers with various field recordings and show excerpts on the cd. The cd will be exclusively available on Alrealon Musique. A second edition of Rapoon/PAS Musique is also in the works.

visit PAS Musique on the web at: pasmusic.weebly.com