The first time I read the name of the artistic identities of Chris Pearson and James “J” Rowbotham, was on an impressive set on Bad Company’s notorious D’n’B forum Dogs On Acid; I discovered more footprints left by Octane & DLK (aka Chris & Jay) on Renegade Hardware’s massive “Last Of A Dying Breed” LP and on various sets by other DJs. The complementarity of their sound, which sometimes reprises some hooks of early D’n’B hits, could be proven by the fact that one of the most catchy tunes of their album, entitled “Murmur” (co-written alongside Bristol-based producer and owner of Symmetry recordings Charlie Bierman aka Break), has been aired 5 times on 5 different shows on BBC Radio 1. The release of their first official full-length album “Method In The Madness“, on Dispatch Recordings, features hand-drawn artwork by Nate (at Southpaw designs) and features 17 tracks (some selected ones have been printed on vinyl as well). On the occasion of this release we had a chat with these two D’n’B (mad?) scientists. 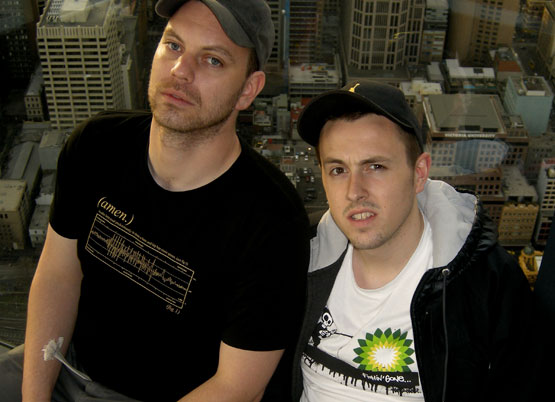 
Octane & DLR: Not too shabby, there is more than a lot going on in our lives at the moment, in and outside of our music careers, but we are holding up nicely. Well that was until we saw that we have 13 head scratching examination questions to answer for you…
Chain D.L.K.: You sold your album out in 3 hours, didn’t you? How did you do that? 🙂


Octane & DLR: Thanks for reporting back to us on our first major error in releasing our first album. Chris may have seen something stating that the first 12″ on vinyl had sold out at ST, and most shops have also sold out of the physical vinyl copy. Chris got a little excited and before it could be stopped the post was made on the internet, which then was read by our 400 million strong fan base, before we knew it, it was the biggest news in the World, topping 86% of news channels around the World. Sorry for the miscommunication, for anyone a little confused out there, so are we, but you can still buy the album around the World at all major outlets, but get it soon before it sells out (on digital 😉 )

Chain D.L.K.: Let’s talk about it… have you made your own transition?


Octane & DLR:  Sorry not 100% on your question, however it is a nice reference to our track that we made with Survival, ‘Transition’… and if that is the whole point of the question, then to answer you, yes since the creation of the track ‘Transition’ we feel we have transitioned and matured as artists, reaching a point where we finally felt confident in our artistic abilities to release an album package which offers more than your average D’nB album. Although we are massively proud of our hard work, it’s up to you, the punters, or as we care to refer to you as ‘the normies’ to decide if it is actually any good! We have a special AIM address OCTANEDLR and email info@exhaleaudio.co.uk that any normy can contact us at if they want to find out what a life of stardom is like… if we have the time in between counting our money we may possibly get back to you, maybe anyways.

Chain D.L.K.: There are many splashes of the so-called drum funk sound… for instance “Murmur” sounds like a crossbreed between contemporary sound and some old stuff by Roni Size or Goldie. On the other side, there are slices from your sonic cake which could recall Photek’s alchemy… some nostalgia for what D’n’B used to be?

Octane & DLR: We just like to think that we put into our music what we love about music, so I guess we could say, yes you are correct, there is definitely some nostalgia for what D’n’B used to be. The best producers have always done what they want to do, whilst doing what they want to do, they became original in their own way, taking influence from the music that surrounds them but at the same time creating something original. Our turning point in our career was when we sat down together and talked about what we loved and why we were making music and how we could use what we loved to influence us in our future, a lot of what we loved was well produced D’n’B which had a story, the drums, bass and sounds reminiscing of that sound that is identifiable to D’n’B but still had some form of originality. Once a genre has progressed so far it can be hard to identify how you can be original as a producer, but that’s why we like to remove ourselves a little from the scene, enjoy music in general, not just D’n’B, and trust our knowledge of D’n’B in general, knowing that when we enter into a writing session we will create something that fits in the scene whilst still having an original edge.

Really we don’t know much about how we sound, a listener will always hear our music in a totally different way, and really there was never a point we actually sat down together to have the above conversation. We did mention it to each other, but most of our progression has just occurred, which is the way we like it, it’s good to be methodical, but throwing a little unpredictable madness in now again never fails to spice things up a little.

Chain D.L.K.: Do you remember the first D’n’B track which reached your eardrum? …and what was the first vinyl you bought?


DLR: For me it was “Brown Paper Bag”, when I was very young, it was just something that was played on a regular basis by my brother, but at the time I thought I hated D’n’B, probably because my mates weren’t into it when I was 11. The most noticeable switch for me, was when I was about 14, and a mate who was younger than me had been mixing for a few months and he played me LK. At the time I was hooked, which was very strange for a Punk and Ska fan, but it just worked, it fitted with my love of computer music production, et viola.

Chain D.L.K.: …and what about your personal background? How did you join your fluxes?


Octane & DLR: We joined our forces after being so terrible individually and pissing off every partner we had ever had to that point, so it was literally the last chance to make something work. Chris has been doing things for years, I (J) had been running a night club called Central Beatz with a crew in Leeds for the past 6 years. We finally got him and his previous partner, Mac, down to a Therapy Sessions special we were promoting. Finally a few months after that we faced up to reality and got in the studio with each other, it definitely wasn’t instant, but after much effort we made “Back in the Grind” with each other and the rest is history, not very interesting history.

Chain D.L.K.: You’re mainly based in Leeds. Would you talk about  the different styles from different UK cities?


Octane & DLR: This is not totally correct, we did live in Leeds, however J is a southerner and Chris is a filthy northerner. Style is not confined to certain areas and cities. Although certain countries have got more popular styles of music at the forefront of the scene, there is always a surprise producer to pop up from nowhere and take over the scene. For example Emperor is from Halifax, I don’t think anyone has been famed for being from Halifax, it’s not got the strongest scene in the World, and the music that he makes could be identified with more of a European sound. However he has been working hard to perfect his sound. In the past year he has risen up, his tunes rinsed around the World, and he’s from little Halifax in the middle of Yorkshire.

Chain D.L.K.: In spite of the crisis in the music business, there has been an incredible proliferation of D’n’B and dubstep releases in the last few years. What do you think about this phenomenon?


Octane & DLR: Let us not speak too much about that. A lot of jealousy gets thrown around the different scenes, and that is natural, this is not the first time and it won’t be the last. All we do know is that this is an amazing time for electronic music production and the blend with more traditional forms of music and production. Some artists have reached the highest peaks of the music world via producing music on their own on a computer, and this has got most of the youth across the world looking into our genres with interest, which can only be hugely beneficial for us in the end! 2012 is already looking like an amazing year for D’n’B so lets enjoy it! 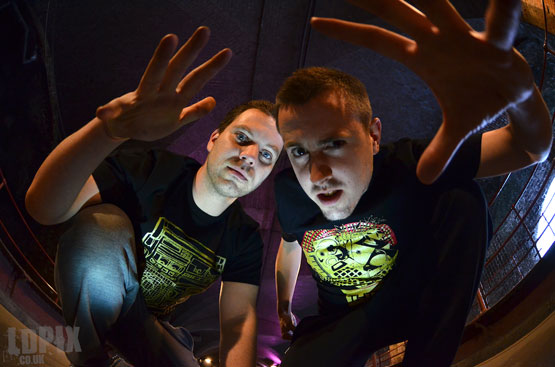 Chain D.L.K.: Do you think the so-called financial crisis had some influence on sounds and themes related to D’n’B?


Octane & DLR: Definitely. We used to turn up to gigs and they’d have a collection of women to serve us, feed us grapes and massage us before we went on stage, since the recession, there is only one woman to share between the both of us. Sharing with Chris is unacceptable, we are getting through it, but luckily 2012 is looking much more lucrative, so hopefully we will be on 2 women soon, one each!!

Apart from that, yes it impacted everyone, but no matter what the financial situation of a country is, to a degree there is always time for music in this world, so the show must go on, even if gigs are getting cancelled month after month. Also things will never be easy, so its good to get used to the hardship of life, it prepares you well for the good times as well as the bad times!


Octane & DLR: Us… sample?? We record absolutely anything we ever do of course, ohhh apart from those samples that we used…. so lets just say, Christopher Octane Pearson’s freestyle vocal heard in our track ‘Seven’, or the unused vocal sample in the breakdown of ‘The Fly’ by James DLR Rowbotham!

Chain D.L.K.: What are your favorite hobbies beyond music?


Octane & DLR: Eating Tea, Drinking Biscuits and not answering questions about our personal lives, as we’d rather meet real people and have real conversations about our life. Not that it will be interesting but at least it leaves some stones unturned, as ‘they’ say. So if you see us in a rave, with a horn/whistle or both, come ask us more about our personal preferences in life.

Chain D.L.K.: Any work in progress?


Octane & DLR: Much work, amongst much chaos, both of us are at slightly transitional points in life for unforeseen reasons, so we are still going at it hard, next things up are Stone & Gerra – Droneheads Remix, Bcee – Beat the System Remix, OD & Break – Powerdown on the Symmetry album, OD & Prolix, coming on his new label. Anddddddd a special little something something coming on a very popular label (well definitely more popular than Dispatch 😉 )

Chain D.L.K.: Is there any producer you’d like to collaborate with?


Octane & DLR: Amon Tobin and Eskmo… to name two of a shit load of producers that we would love to be in the studio with. Lets not get started!