Originally a one-man band by Gianni Giublena Rosacroce who mixed together mediterranean folklore, middle eastern melodies and exotic elements on the first cassette he issued, Turin-based La Piramide di Sangue (Italian for The Pyramid of Blood) is now a seven piece psychedelic rock band with clear middle eastern influences and an impressive cinematic hook. Their last (very impressive) release, “Tebe“, might sound like a bloody blob, which started from the Egyptian Museum to invade the city streets with furiously cinematic anthems. Recorded in one take, “Tebe” has been released in a 500-copies red vinyl limited edition (I warmly recommend to grab one of them!) by Italian label Boring Machines and Berlin-based imprint Sound of Cobra. Let’s burrow our way under the Pyramid…

Chain D.L.K.: How did you all get together? How did you lay the foundation for La Piramide di Sangue?


La Piramide Di Sangue:   We all knew each other for a while and we decided to play together after the release of our clarinet player GG Rosacroce, we thought it was a good idea to arrange his songs in a more psychedelic way…

Chain D.L.K.: Turin has been considered an occult or magical city. Does Turin influence your sound in a way or another?

La Piramide Di Sangue: Turin (with Lyon and Prague) are part of a satanic triangle above Europe that existed for ages, we have a lot of metal bands here and, yes, I think that this may have inflenced our sound, we are all into this esoteric and masonic mood… 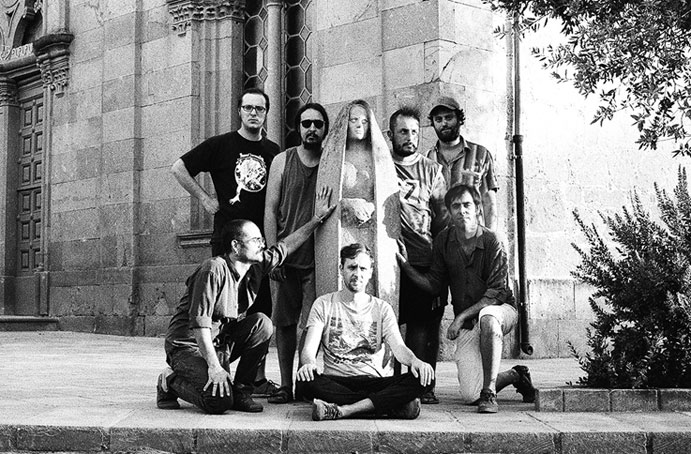 Chain D.L.K.: You melt together psychedelic rock with middle eastern influences. The cinematic hooks of your sound made me think of a historical moment of modern music which was the subject of an interesting essay by Adinolfi – “Exotica Generation” -, when exotic elements got re-processed and combined with western musical tradition due to the charm of some distant cultures. What about your sound? Would you speak about a renewed “exotism”?

La Piramide Di Sangue:  What we combine is nothing new, we just try to do it in our own way, a lot of kraut bands melted mid east influences with psychedelic rock, think about Agitation Free, or one of the best etno psychedelic bands in Italy, Aktuala. It’s very difficult in these times to invent something completely new, but if you are true to yourself and to your roots you can still do something good and original. And now with the Internet and blogs it is way easier to find amazing music from other cultures…

Chain D.L.K.: “Tebe” sounds really catchy. I’ve read you recorded it in one take. I should surmise you already knew each other from the performative viewpoint…

La Piramide Di Sangue: We all know and love each other’s side projects so, yes, we already knew each other’s limits… we practiced a lot before the recordings of the album, when we arrived in the studio we were pretty sure of how to do it, and it was pretty fast…

Chain D.L.K.: Have you tested it live on stage? What was the reaction?

La Piramide Di Sangue: We played and toured a little bit and we are about to play some other shows in Italy next month. Live is very good cause it’s usually very loud, and we always got good reactions from the audience… the show is wild but it’s meditative too, its very colorful.

Chain D.L.K.:  The titles of the tracks look like titles of chapters of a script… is there any plot behind “Tebe”?

La Piramide Di Sangue: Not really. Some titles comes from the first release of our clarinet player GG Rosacroce, the rest of the titles came out in a very dumb and natural way…

Chain D.L.K.: During my first listening, a friend, who was there for a coffee and a chat, asked me if I had reveiced a promo from “some Area cover band who got overexcited by Tahrir Square’s riots”… I limited myself to mumble with a look of disapproval while sipping my coffee… how would you have reacted to such a comment?

La Piramide Di Sangue: Hahaha! We’ll take it as a compliment, it’s cool to be compared with Tahrir Square’s riots! 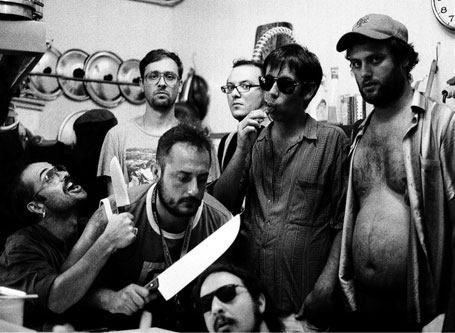 Chain D.L.K.: I’ve read the funny monikers of your members… You managed to engage Mubarak’s nephew in your line-up… what’s the tear-jerking story related to his hiring? Who eliminated him for an elitarian immaculate casting?

La Piramide Di Sangue: That story relates to a Berlusconi gossip you may not know about… Years ago they found him with a beautiful prostitute named Ruby, he was about to be processed and he said that that girl wasn’t a working girl but that she was Mubarak’s granddaughter, a friend.

Chain D.L.K.: There are many skilled Italian underground bands with such a collagist attitude and an explosive wit… what are the main obstacles that prevent you from coming out of the dark?

Chain D.L.K.: “Tebe” has been co-produced by Boring Machines and Sound of Cobra. How come?

La Piramide Di Sangue: We’ve known Ricky since he was booking shows in a cool squat in Bologna, he lives in Berlin now… We just sent him the record and he said “Yeah! I’ll do it with Boring Machines…” I think these are 2 of the best experimental labels we’ve got in Italy now.

Chain D.L.K.: What about the cover artwork?

La Piramide Di Sangue: The artwork is made by a friend of Ricky that takes care of most of Sound of Cobra releases.

Chain D.L.K.: Is there any funny anectode related to the recording sessions of “Tebe”?

La Piramide Di Sangue:  No, but last time we played in Rome we forgot a member of the band at the club and went back home without him… you know,we are 7, sometimes it’s difficult to count…

Chain D.L.K.: Any work in progress?

La Piramide Di Sangue: We will record the new album next spring I hope, we already wrote most of it, and hopefully we’ll tour Europe.