An iridescent approach to composition marks the intense musical activity by Arnold De Boer and you can easily verify such attitude by listening to his important contribution to the enduring underground avantgarde-punk band The Ex after he replaced former singer and frontman Jos “GW Sok” Kley. Zea is his “solo”. My quote-unquote expression makes sense as he often involves many different musicians even if most of the awesome ideas he embeds on records come from his fervid mind. Have a listen to his forthcoming fifth album “The Swimming City” (coming out on Makkum Records) , which includes twelve palatable “elastic, urgent, always playful, joyfully obstinate, double-bottom open-ended” tracks,  as a further proof of what I’ve just written… Let’s get acquainted with this talented musician and his swimming city. 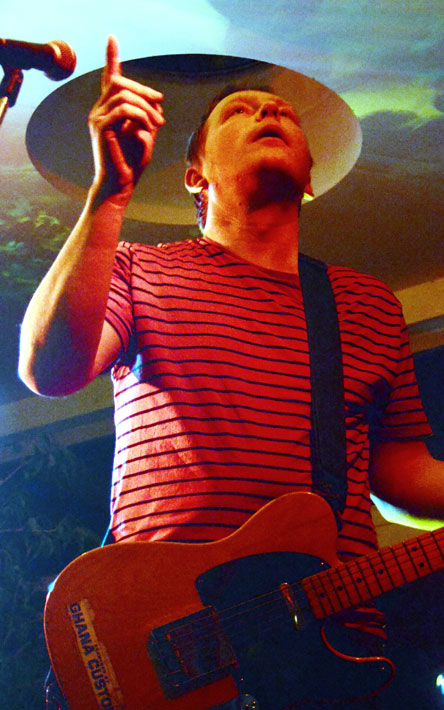 Chain D.L.K.: I feel good, thanks! Well, I was really astonished by your album… primarily for its lyrical content, which connects with my actual feelings at the moment! It seems to give voice to something which is near to come… is it a good or ill omen?

Zea: I guess you are referring to the first song “Sub Specie Ludens”… Well I wrote these words from the perspective of human play. I think humanity is making very strange and stupid moves sometimes but I am an optimist and expect the world to turn upside down and shake things into a good place. At least I will do all that is in my power to help this happen.

Chain D.L.K.: Have you heard that sort of nursery rhyme “1,2,3…” from some merry children singing and playing in a schoolyard?

Zea: Ah, no not yet. Maybe one day, one day there will be teachers singing this song for the children in school. I would be delighted. But I am happy to hear that the song reminds you of a nursery rhyme. Children songs and sirens are a great musical inspiration to me.

Chain D.L.K.: You expect the world turning upside down… many people ask themselves when this is going to happen… what would you reply?

Zea: When we all take one step to the left at exactly the same moment.

Chain D.L.K.: Some tracks of the album such as “All Words have been here first” or “Exploding Head Syndrome” have a certain African scent… is it a sort of souvenir from your African tours in countries like Ghana and Ethiopia?

Zea: For sure! The travel and playing with African musicians and listening to hundreds of records with fantastic African music has left its trace in my brain. I think it is more a treasure than a souvenir.

Chain D.L.K.: What’s the meaning of “De Zwemmende Stad”? Whose is that voice?

Zea:  The voice is Khalid Hammaoui, a Maroccan guy who features in the movie “Amsterdam Global Village” by Johan van der Keuken, a fantastic film. He talks about growing up in Amsterdam, then having to follow his family to Morocco and serve in the army and how he misses Amsterdam.

Chain D.L.K.: Another “mysterious” track is the last one as you sing in Fryson… the music is really touching… I’ve then read that “Ik kin der net by” refers to your past?

Zea: Yes, the song is about my father and mother. My father took care of her for years when she was very ill and died. The lyrics are written from my father’s perspective.

Chain D.L.K.: You can reasonably be considered a sort of lodestar in A’dam… is “The Swimming City” a reference to A’dam? How did A’dam influence this album and your artistic vision?

Zea:  Amsterdam is “The Swimming City”. On the cover of my album you see the map of Amsterdam. All the yellow spots are public toilets. Amsterdam is great but we have to build the city ourselves. Hence the song: “I Build My Own Town”, which is also about Amsterdam.

Zea:  The OCCII. A wonderful building and a great place where fantastic concerts take place. You can check OCCI website here: www.occii.org

Chain D.L.K.: You are involved with many excellent musicians in “The Swimming City”… can you tell us how you met them?

Zea:  I met Mats Gustafsson and Xavier Charles through collaborations of them with The Ex. Since 2009 I play and sing in The Ex. I know Oscar Jan Hoogland because I was his teacher in philosophy many years ago and I know Esther Kluft because she was my neighbor even longer ago, in the village where I grew up called Makkum.

Chain D.L.K.: Is it true that Esther Kluft was your neighbour?

Chain D.L.K.: What’s the bridge between Zea and The Ex?

Zea: The way I work and do things fits perfectly with how Andy and Terrie and Kat work. We share the same passion for music and we get along really well. With Zea I toured in support of The Ex many times. We became good friends. When G W Sok left The Ex, they asked mee and it fit really well. It felt like starting a new band. The energy we can generate with the four of us is super strong.

Making music is totally different with The Ex than alone as Zea.

Chain D.L.K.: Have you performed “The Swimming City” on stage?

Zea:  Yes, most of the songs I have been playing live already for some time. I need to play songs live first before I record them. This way of working I also share with the other Ex members.

Chain D.L.K.: What can you tell us in reference to a title like “Dark Mind”?

Zea:  A song like this comes to me like a dream. It is a combination of imagination and real life. I take the idea of a “dark mind” from the world of Encyclopedia and bring it into the musical world.

Chain D.L.K.: Are you frightened by fear?

Zea:  “Nothing is terrible except fear itself” by Sir Francis Bacon.

Chain D.L.K.: You’re one of the most interesting music juggler I’ve recently listened to… in your own perspective, what’s the future of music? Will music play a different role for desirable human renaissance?

Zea:  I think music has always played many roles and still does. A lot of music stiffens people’s brain and lulls them into sleep. There will always be off kilter minds who make music that will do the opposite. But don’t wait until you see it on TV or on Facebook. You have to look around and dig up the future. Music is deeply connected to other parts of life and can take you out of it for a while. The abstract beauty and drive music can have is very powerful. But it is personal I believe. It makes fans one by one.

Zea:  Tomorrow I leave for a Zea tour in the UK together with King Ayisoba from Ghana!

Zea: Next week I will return to the UK with The Ex!

visit Zea on the web at: zea.dds.nl