Brian Graupner of the electro-industrial Gothsicles speaks with Chain D.L.K. about the 2010 Triton Festival, highlights of touring, and upcoming events.

Chain D.L.K.: The Gothsicles had a pretty cool closing for your set at the 2010 Triton Festival with a certain special guest – for those that weren’t at the show, can you tell us what happened?

Brian Graupner: Steve Winwood and I go back a long way and a lot of people don’t know that he owns a fantastic array of funny hats, so I thought it would be a good idea if, for our last track, he came out and showcased various pieces from his collection.

Chain D.L.K.: How did Triton compare to other festivals you’ve done? Do you have a favorite part of touring?

Brian Graupner: Triton was a gem. At the time of this interview, this event was just over two weeks ago and I’m still super pumped on it. For a festival of such a considerable size, especially one in its first year, I would say that it ranks pretty effin’ high on the festival scale.

Chain D.L.K.: You’ve mentioned disorienting experiences touring and kicking back with bands you used to listen to before you started making music – was there a band that had you particularly awestruck?

Brian Graupner: Taking the band shuttle from the Kinetik festival back to the airport with Claus Larsen of Leætherstrip and talking about pets for an hour was wholly surreal.

Chain D.L.K.: You’ve said in the past that you get inspiration from your songs from what you know. Given that the one of the tracks on your latest album is called “Second Album Means It’s Too Late to Change Your Band Name,” if you could name the band again, what would it be? 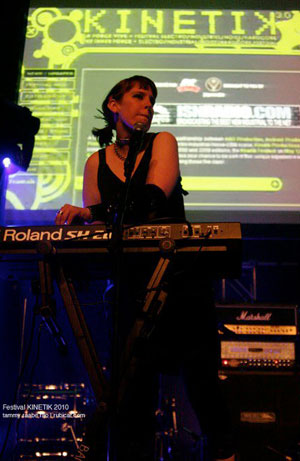 Brian Graupner: I’m torn between “Virus Disease 3.14159” and “[[-CYBER::SYSTEM-]]”.
Chain D.L.K.: What comes first, the music or the lyrics, and how does the band work together (or does it) in the creative process?

Brian Graupner: Classically, it’s been lyrical concept > music > actual lyrics, but music’s been coming first a lot more lately and I’m not sure why that is. The collaborative process usually consists of me writing a track and then sending it off to the other “studio” (and occasional stage) Gothsicle, Dan Clark (of The Dark Clan and erstwhile member of Stromkern and Null Device) and paying him money to make it sound better.

Chain D.L.K.: The Gothsicles frequently mix electronic music into albums that are underlaid with old videogame-sounding music – did you ever play the original Nintendo or Sega, and if so, how did it influence your musical stylings within the band?

Brian Graupner: Songs about Nintendo games (what I would sometimes call “Nintendustrial”, but only in interviews) was a huge (though not exclusive) part of the basic concept for the project’s initial incarnation, but I know that’s getting to be a pretty stale scene, so we’ll see where it goes. Old school video games are still a major fingerfuckin’ factor in my life, though, so there will definitely continue to be tracks about video games and video game aspects on future albums.

Chain D.L.K.: To make a slight understatement, you seem to be able to make fun of the scene – were you ever a brooding, melodramatic, sun-fearing goth?

Brian Graupner: I have no idea what you are talking about.

Chain D.L.K.: What do you see in the crystal ball for the Gothsicles future?

Brian Graupner: I was really gung-ho about this new project with darling Matt from Caustic entitled, “The Causticles”. We got pretty far on it, but I’m not exactly sure what happened ’cause now we’re both back on new albums for our “main” projects. That being said, I’m really happy with the material produced thus far for the new ‘sicles album, which should embrace the night’s eternal desolation in early 2011.

Things have really been exploding on the live show tip, as well, so check that out if you’re reading this within reasonable time of its publication.

visit artist on the web at: http://www.thegothsicles.com/