LE DANZE ELICOIDALI– Music & Ebook: the final chapter of the “Trilogia delle Stelle” (“Trilogy of the Stars”)formed by “La Via Delle Stelle”, “Storie di uomini donne e sogni”, “Le Danze Elicoidali”“The Helicoidal Dances” is musical and visual representation of the lightinterpreted as the essence that crosses the spaceand in its path creates volumes and suggestions– CD https://katyasanna.bandcamp.com/album/le-danze-elicoidali– Ebook free downloadhttp://issuu.com/katyasanna/docs/ebook_-_le_danze_elicoidali_-_katya/0http://ita.calameo.com/read/0041556047275b1d6f741– Video http://youtu.be/SQ9jIBIO1-ASongwriter and singer endowed with a range of four octave, she composes very personal melodies and harmonies which a singing style characterized by an ancient flavour with arrangements which sum up electronic, ethnic, romantic, ethereal atmospheres. The lyrics of Katya’s songs are often inspired by literary themes, for instance her long reserch on myths and legend from all the world. Apart from her works as a vocalists, she likes very much to collaborate with other artists who belong to different musical culture in order to get in touch with a lot of genres: Soundtracks, Jazz, Ancient Music, Heavy Metal, Multimedial music and poetry project. She is also the author of the fantasy trilogy “Le Chant De L’Ange” hosted by “Il baco del millennio” di Radio Rai1 National Italian Broadcaster. She manages ablog dedicated to art and culture. As multimedia artist she have received the European award ART GOLDEN CARD. Some art expò aspainter: Palazzo delle Esposizioni, Roma, Ambassade of Republic of Egypt, Roma (Italy), Galleria Geraldes Da Silva di Porto (Portugal), Aura Art Gallery in occasion of Venice Biennale 2009 “Making (our) World” Venice (Italy), Red Gate Gallery, London (UK), Vinyl Art Show at Hoodlums Records, Tempe (Arizona-US), “Mettiamoci Una Pezza – città ai ferri corti: Urban Knitting 6 Aprile 2014” Urban Knitting In occasion of the fifth anniversary of the earthquake in Abruzzo, L’Aquila (Italy). She graduated from the Art Institute in Rome, attended courses of embroidery: Crochet de Luneville and Haute Couture with the teacher Elisabeth at Roulleau, and Silk Ribbon Embroidery at the School of HighFashion of Katerina Kouzmina, course of tapestry at the School of Ornamental Arts of Rome. In 2009 she published “Grand Tour” cd with her version of songs of: The Beatles, Fabrizio De Andrè, Peter Gabriel, Kate Bush, Tori Amos, David Sylvian, Joan Baez-Ennio Morricone, Faust’O, and her homage to Cathy Berberian. In 2010 partecipates at the “Rom’Art Independent Festival” with her live performance “L’Approdo” (The Landing) winning the “Alda Merini Award” for the emotive and evocative content, for the expressive power and the pure capacity to join distant sounds from the of the habitual present. February 2014 Katya Sanna is the winner of website Flowers in a gun’ contest “Band of the week”. March 2014 the album “La Via Delle Stelle” is the CD of the month for the Italian music magazine “Rockerilla”.Now at work on her version of “Folk Songs” the song cycle already Luciano Berio composed in 1964 and performed by Cathy Berberian. 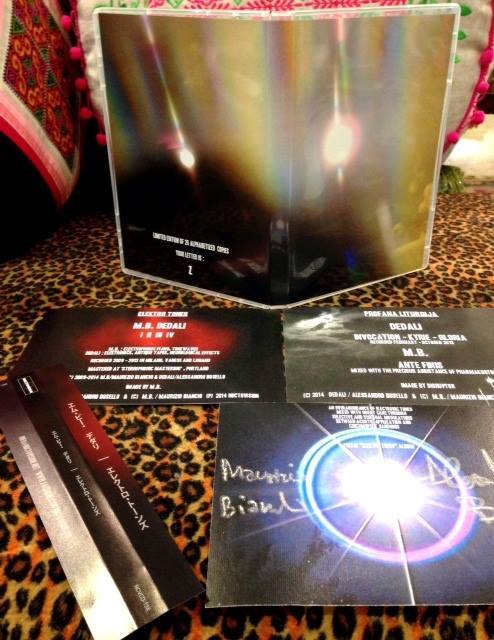 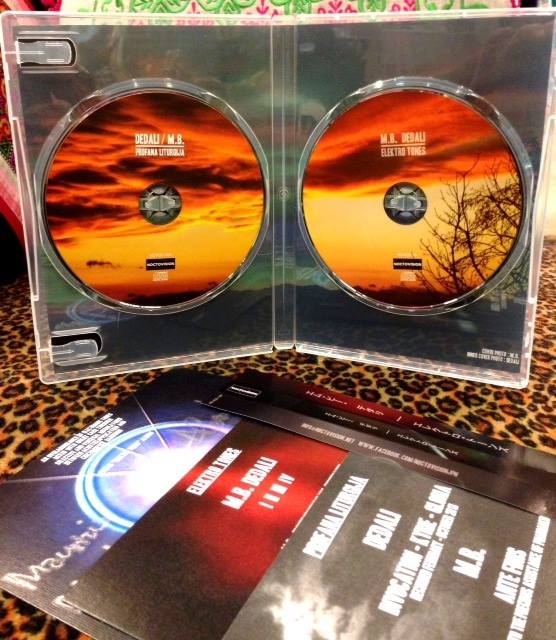 “Elektro Tones” is a collaboration between M.B. / Maurizio Bianchi and DEDALI (Alessandro Bosello).

Italian legend M.B. / Maurizio Bianchi is one of the most important and influential artist of the Industrial / Experimental music scene since his beginning in 1979.

Dedali / Alessandro Bosello is the creator of the music for the three chapters of the multimedia series “La Fin Du Monde”.
He also runs the music label menstrualrecordings since 2005.

We have just a few copies of the Alphabetized Edition available at our web shop. 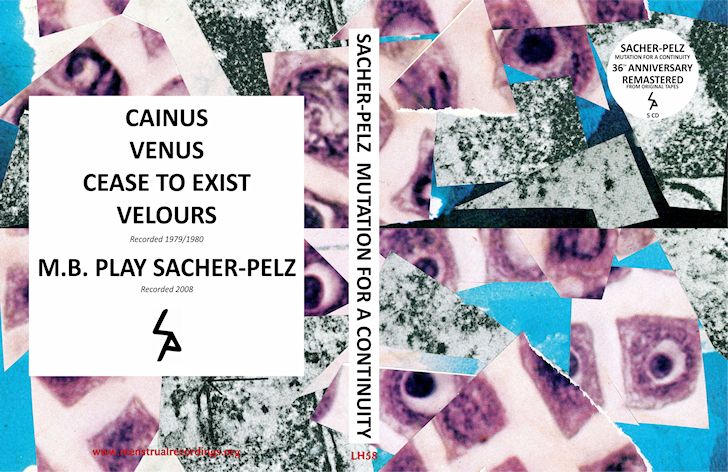 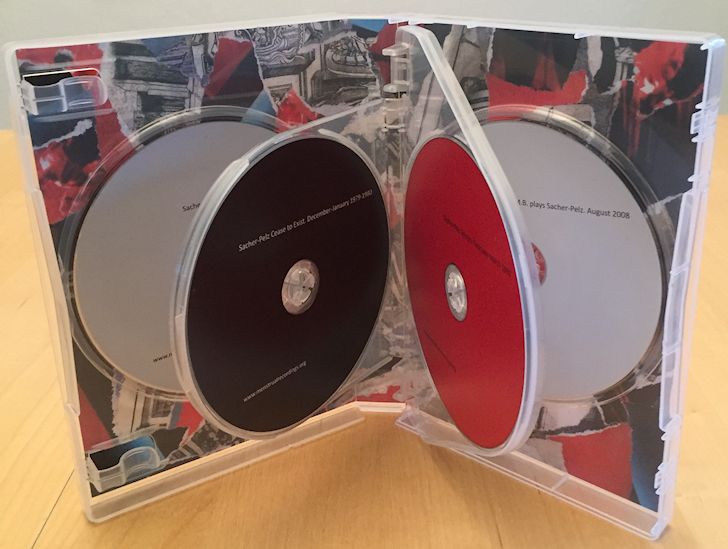 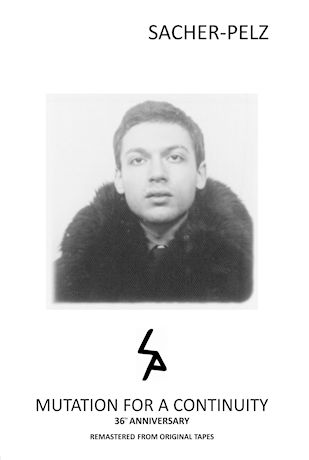 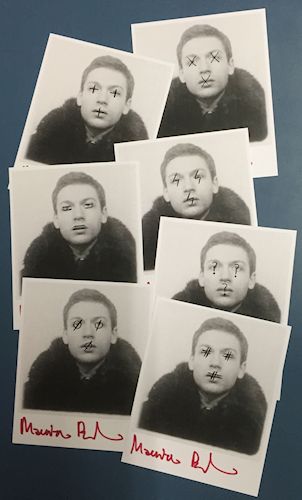 Now shipping.
Some copies of the box set will include a SIGNED Sacher-Pelz picture!

This box set contains the very first four tapes recorded by Maurizio Bianchi under the moniker Sacher-Pelz in 1979/1980.

For the first time ever the Sacher-Pelz albums are remastered from original master tapes that belongs to the menstrualrecordings archives.

Being busy for Spheric Music artists like Robert Schroeder, Bertrand Loreau and many others…this moment is something special for me:
…an own new Solo-CD has been finished. The fans have been waiting for new works for 20 years:
LAMBERT – Drachenreise (Spheric Music SMCD 1006 / H’Art Musikvertrieb).
In 1991 I started releasing my first CD Inside Out which was the most successful Spheric CD ever. It featured some great Tangerine Dream elements.
The new album also picks up some Berlin school elements but also features human and emotional elements, that makes “Drachenreise” quite exciting.

To get a first impression, please check this ite:
https://www.youtube.com/watch?v=Ib8yzGAsGZ8

The wait is over! On 27.2.2015 the anniversary edition of electropop compilation series from conzoom Records will be released.

In the usual style, varied and fresh conzoom again present 13 new emergent groups and artists on “electropop.10”. At a low price fans of electro sounds can discover wonderful new groups with wonderful and melodic songs in stunning quality on a 70 minute journey. In addition to the normal edition of the CD there will also be a special edition of which features a Promotional-CDr with even some more interesting songs.

Anyone who purchases a electropop.10 Compilation through the labelstore of conzoom Records until  15.01.2015, gets a name entry into the CD booklet!

Be so kind spreading this ordering link through your website, too:

Here is the track listing for electropop.10:

02. Electro Planet – Way To The Planet (Remix by Eduard Reik)

03. Electro Spectre – Your Love Is A Criminal (The Vibe Of Vice Remix)

09. The Voice And The Snake – Children Of The Sun (Ricardo Autobahn Extended Edit)